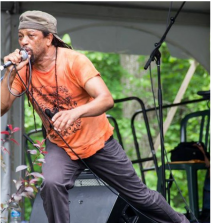 NICKOLI ANDREWS is I&I Riddim's dynamic lead vocalist.  This spirited singer's love for music is rooted in Kingston Jamaica where he was born, and in Westmoreland where he was raised.  Nickoli is known for his passionate high energy performances.  He is a true entertainer and composer who excites and electrifies his audiences with tunes from a variety of music genres, but his true love is rockin' the reggae.  Nickoli enjoys his craft  and has spread the love and joy of reggae music nationally and internationally.  He has shared the stage with many artists both local and international to include Bunny Wailer and Junior Marvin both of Bob Marley's Wailers.

EARL CARTER - Earl Carter is a Washington, DC based Guitarist, Bassist and Producer whose multi-faceted talent, professionalism, and star-quality has officially put him in the class of “Billboard Recording Artist".  Earl is I&I Riddim’s featured lead guitarist but over the years has performed with many artists, local, national, and international.  As a freelance musician, he has worked with Marcus Johnson, Alyson Williams, Bobby Lyle, Freddie Jackson, Angela Bofill, Regina Belle, Mya, Syleena Johnson, Sy Smith, Bob Baldwin, Tony Terry, and more and has been a solo opening act for Parliament Funkadelic, Pieces of a Dream, Spyro Gyra, Bona Fide, and many others.  Earl has performed Blues Alley, Rams Head Onstage, and many other historic venues in DC and Maryland. He also performed for The National Smooth Jazz Awards in San Diego, The Bermuda Jazz Festivals (’02 & ’03), The Ghana Jazz Festival, and many other televised concerts and festivals. He recently completed his eighth personal CD project “My Life In Your Hands" which now available in stores.  Check out Earl at www.earl-carter.com 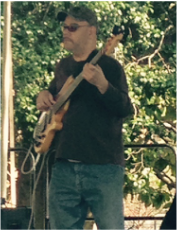 J.J. JOHNSON - John 'JJ'  Johnson is a member of the “bassie” team of I&I Riddim.  He is a Washington DC based veteran, having been the bass player  for  Carl Malcolm and the Positive Vibrations during  Washington D.C. 's Reggae Renaissance period 1980 -90.  Vibes were all over the area, especially around  Adams Morgan and Georgetown venues.  JJ also toured with Fan Fan and Friends a band that specialize in a jazzy reggae Creole fusion and toured with Determination Band and  SEE-I in the earlies.  JJ's bassie  influences are Robbie Shakespeare, Family Man, Lloyd Parks, and Leroy Sibbles.   He has shared the stage with many of the all time reggae greats including Third World, Lucky Dube, Yellow Man, Toots Hibbert, Inner Circle, Ky-Mani  Marley, Bunny Wailer, Roy Ayers,  Angela Bofill, JJ is most known for his “very cool” attitude and the riddim that serves as the heartbeat of I&I Riddim. 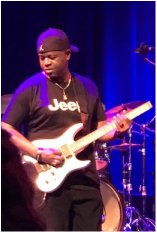 Malcolm Hall is a true blessing being the real deal and original bassie for I&I Riddim.  Long before immigrating to the US in 2002 from Guyana, Malcolm started his musical journey by playing the steel drum at the age of 5.  His first gig was a Christmas school concert where he received a standing ovation when he played “London Bridge.”  Malcolm also learned the Brazilian four string Quatro guitar and had grown so accomplished that by age 12 he performed at his church’s local crusades and open air concert.  His life then was church, guitar, eat, sleep, repeat.  Malcolm also developed an unusual passion for playing bass saying it might touch your heart in a special way.  Twelve notes (and God’s grace) can make you happy for a lifetime.  Malcolm’s life now as a performer includes church performances as well as performances with other bands.  He toured South America, the Caribbean, Canada and the US where he opened for many national and internation acts, including Gregory  Isaacs, Bunny Wailer and Junior Marvin. 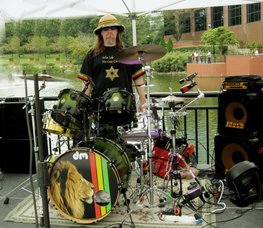 DAVID MCDAVITT:  Since first punching through the fragile paper
​  heads of a toy drum kit at age seven, drums have been David's
​  madness.  David studied ethnomusicology at the University of Virginia and with Asante Okyerema, the Ashanti royal drummer who played on Paul Simon’s "Graceland" tour.  Specializing in Reggae & African music, David has performed at venues including The 9:30 Club, The Kennedy Center, Bottom Line, Blues Alley, and HBO.  He has performed with such eminent acts as Big Village, Jamal Millner (Corey Harris/Rainmaker), Chopteeth, King Mensah, & Fanton MoJah. 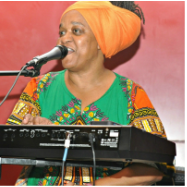 ICHELLE COLE -- Ichelle, mother of four, is an accomplished producer, songwriter, arranger, vocalist and keyboardist in her own rite. Born in St. Ann, Jamaica, Ichelle migrated to the U.S.A. in 1978 and has performed with several groups in the Baltimore-Washington DC area. Ichelle has also filled in as keyboard player backing up Andrew Bees performing live at the Vermont Reggae Festival in 1996 and appeared as backing vocalist and keyboard player with Jr. Marvin of the Wailers.  Ichelle can also be heard vocally/instrumentally on several national and local artists productions.  Ichelle adds a very special energy and flavor each time she graces the stage with  I&I Riddim.  You can view more about Ichelle at http://strykersposse.com/.

.FRANKIE JAVOIS also is part of the keyboard team of I&I Riddim and performs with I&I on a regular basis.   Frankie is from the island of St. Martin and graduated from high school in St. Croix USVI where he played with the Doctor James Talent Club and various local bands.  Upon arrival in the US, Frankie formed DKGB Reggae Band and has since been much in demand with all of the local reggae bands.  He is currently the leader of the Ewabo Trio and from 2011-2014 was the lead keyboardist for the Original Wailers.  He is a true professional in every way and is always a welcomed treat for the I&I Riddim reggae band.